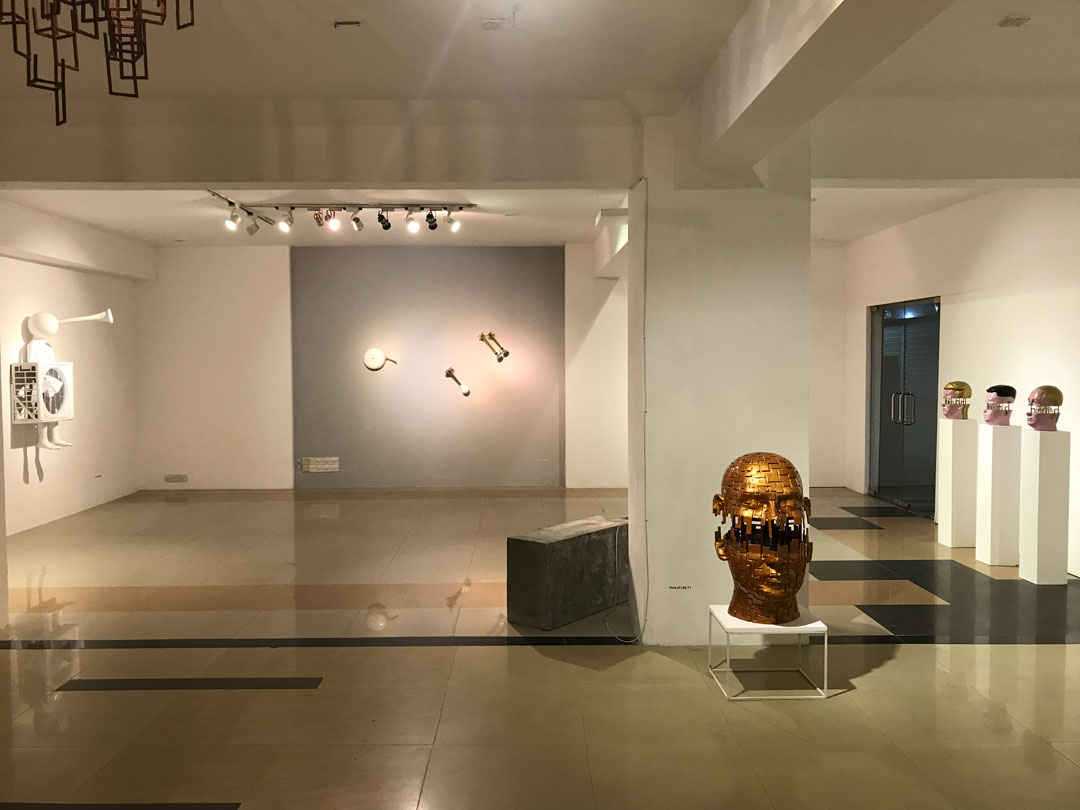 A duo exhibition by

This city is drowning in noise. Dust is accompanying the offbeat hammering of construction sites meant to elevate this city to a higher economic sphere. With no enforced regulations, neighbors have nothing to do but cringe and wait the months and years it will take for a site to finish, just for another developer to add to the orchestra of chaos.

Meanwhile, the news and media outlets are making threats seem more real than they are, keeping the masses afraid, so that the oligarchs can rule from their silent palaces out of the city center. Nowhere else in human history, have we had such grotesque structures rise up at such rapid speeds. Are we going to a better place or setting ourselves up for disaster? Shimul Datta’s sculpture selfie, attached to a fan motor, is either shaking its head in distress to our current affairs, or serving a warning by endlessly saying no to the whole situation. The fan in the heart of the accompanying humanoid sculpture is perhaps meant to cool off the spectator, so that they can remain silent in comfort. Knowing that there is not much they can do to the snowball effects of the industrial age. Perhaps we can contribute by using less plastic and taking up bicycle riding.

The choice of colour in Ashik’s sculptures reflect the industrially prevalent colors of our wastage products that are overflowing earth’s oceans. Marine life is being overthrown by tones of garbage. The motifs of chairs repeat through the sculptures of Ashik; a hint at the game of thrones, or perhaps global politics theatre to keep the masses down and under.

There is no way to know in this age of manufactured confusion, but Ashik’s sculptures attempt to at least remove us from the situation, so that we can see it as detached observers, and thereby gain some sort of clarity, even if for a moment.

A pillow separates another sculpture in half, comforting the paradox, that we are actually making our lives worse by trying to make it better.

Shimul takes a jab at this paradox by transforming the noise into sculptural forms, with three objects on a prominent wall representing the ambient noises of Dhaka.

State of Affairs is a cautionary tale amidst an ocean of such warnings from our artists who are adamantly working on finding new ways to detach and free the observer from the complicated cycle of destruction. We need buildings in order to accommodate the masses living in the capital city, but we also need not wake up and have heart attacks in the middle of the night from trucks being unloaded in the construction site next door. The men unloading the trucks are doing it at night to avoid the traffic and the heat, you’ll wake up pissed off and beep the car horn unnecessarily, while someone out there is sleeping in peace at your expense. Shimul’s fan man will keep rotating its head back and forth, because there is nothing to be done.

The earth has gone through many cycles, the seemingly end has approached us many times, but we are still here. Costa Rica is aiming to completely eliminate fossil fuels, while 40% of Danish citizens are riding their bicycles to work. At times like these, where it feels like the end is near, we need artists like Shimul and Ashik to take us out of our loop for a while, so that we can detach ourselves from our current situation and arrive at some form of clarity. The clarity, which is so necessary in realising that complaints will get us nowhere, only insight and action will.